In order to decrease pollutant emissions, decarbonation of combustion has become a priority. The next generation of combustion chambers are then designed to burn either less fuel, in so-called lean to ultra-lean operating conditions, or to burn alternative fuels such as hydrogen, hydrogen-methane blends or other sustainable fuels. These combustors are however more difficult to ignite, and prone to combustion instabilities, which lead to severe malfunctions or even partial destruction as was for example already observed in aeronautical or power-generation gas turbines. The proof of concept has been made that Nanosecond Repetitively Pulsed (NRP) discharges can be used as efficient ignitors and as well as actuators for active control of low frequency combustion instabilities, without the drawbacks of traditional actuators such as loudspeakers or fuel valves. The challenge today is to extend such electric control to real combustors, taking into account the particularities of the flow and the flame in real operating conditions, i.e., high pressure and possibly liquid fuel.

In this context high-fidelity simulation of plasma-assisted combustion plays a crucial role in the development of an efficient and reliable technology, and is used with two different and complementary objectives. First the detailed simulation of plasma discharges allows to increase the knowledge and understanding of the underlying physics and their interactions with a flow and a flame. This leads to the development of accurate models, which are then implemented in CFD codes in order to design NRP systems in industrial configurations.

In the CoEC project, numerical simulation is used to understand the impact of NRP discharges on flames. On one hand, detailed non-equilibrium plasma simulations are performed to describe the discharge itself, in particular the production of heat an active radical species. To this purpose two codes are developed and used in COEC, AVIP from CERFACS and DISCO from TU/e. An example of a pin-pin discharge computed with AVIP is given below. One the other hand, the impact of this heat and radical production on a swirled flame is studied with the code AVBP. First steps with a simple NRP model have been performed as illustrated below. 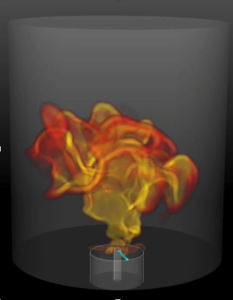 View of a swirled flame anchored with NRP discharges (blue line), simulated with the code AVBP. 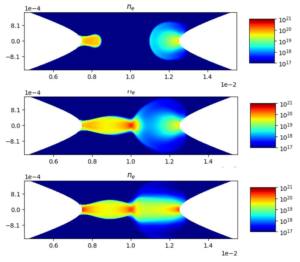 Time series of a discharge (electron density) in a pin-pin configuration simulated with AVIP.